To the weird Architects around!

I had gone to a restaurant for lunch today - and before I could notice the waiter or the food, I couldn't help but notice, the little gap between the serving area -and through them, the kitchen dadao tiles. From the distance, I could see that they were brown in colour, had square patterns on them. A couple of years back, I wouldnt have cared about those tiles. But today, I knew the name of the tile, the series it was a part of and where you could get it. I even knew its price. Earlier, I would have found things like this weird, but after a long time of recognizing floor tiles, the tiling pattern - how the cut tiles are placed, points where the tiling hasn't been done neatly etc., I am not surprised any more. 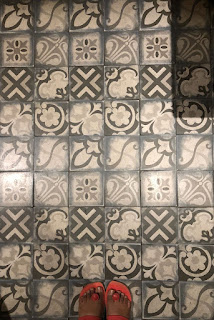 The stories don't end here - a week back, as our office set off to a farmhouse to enjoy a weekend, I was sure if one thing - there wouldn't be any 'work' conversations. We would enjoy the weekend, away from architecture, away from projects and away from designing. But turns out, as we reached the top of a hill there, we had already begun designing. Conversations about an office on top of the hill, it's orientation, it's materials, it's structure began to be discussed. By the end of the trip, we knew exactly how and what this new office of ours would be.

We Architects are a weird bunch - everytime we get to a restaurant, we obsess about the material the shutters are made in, the roofing material  that it was covered in and the functionality of each material. We talk to restaurant owners asking who the Architect who designed it was. We ask them about details of how their gates were made, where they picked their light fittings from. We even take the phone numbers of painters we see on the road. We are obsessed.
By Ananya at June 07, 2018